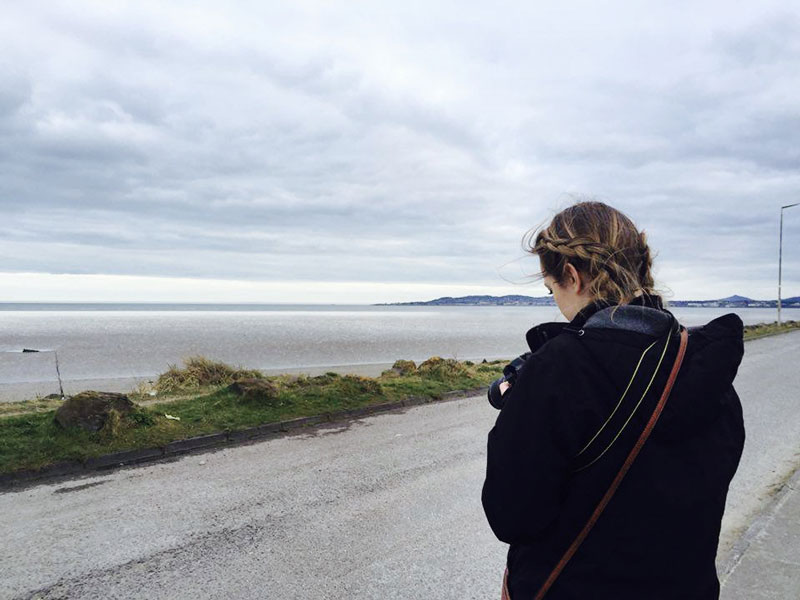 If you’re like me, studying abroad seems synonymous with words and phrases like “life changing” and “adventurous.”  It is discussed as a magical time in a college student’s career in which the live a life worthy of a Jack Kerouac novel with a successful movie adaptation. While my semester in Ireland is one I am incredibly grateful for and will never forget, it was far from perfect.

And that is one hundred percent okay!

Things rarely go the way we expect them to go. For example, I planned a trip to Dublin with a fellow Emory study abroad student, and the trip we planned was far from the trip we had.

We began our visit with a trip to Trinity College, walking around and enjoying the toasty 50-degree weather. This was probably the warmest and sunniest day we’d had in Ireland so far! After checking into our hotel we decided to go to a lighthouse, so we called a cab and were on our way. The following is an account of the events from my blog, Abroader View:

As we drove through the shipping yard, I couldn’t help but make the comparison of the shipping crates and docks to those in just about every procedural cop drama ever made. I could envision the entire CSI:Miami episode taking place. A body washes up onto shore. The detectives are informed about the jogger who discovered it. The rookie cop says it could be an accidental drowning, but the seasoned detective disagrees looking into the distance saying, “Something smells… fishy.” And then the beginning of that “The Who” song would come in like “YEAHHHHHH!”

Anyway, crime ambiance aside, we figured we gave ourselves enough daylight to enjoy the sights and head back to the hotel. We reached the edge of the beach at around 4:30pm, and because we didn’t think our phones would work, we scheduled a time with the driver to come pick us up. 6:30pm we agreed. 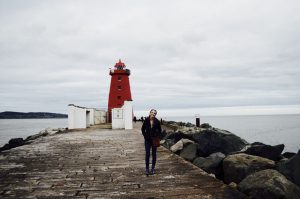 Well, we walked the cobblestone boardwalk to the lighthouse, taking our time and numerous photos along the way. As we were walking back towards the shore, Genevieve and I lauded ourselves for making the right decision. “I’m so happy we did this rather than stay in the city” we said, more times than once.

We reached the shore with about an hour to spare. We pondered making the walk back but there would be a taxi coming for us soon, so we decided to wait it out. We walked along the road that was beside the beach, and I took about 200 pictures both to capture the incredible view and to kill time.

At 6:25, we were relieved that we would be picked up in just 5 minutes. It was starting to get a bit chilly, as the sun was setting.

At 6:45, we commented how rude it was that the taxi was this late.

At 7:00, I asked Genevieve if she had service. She didn’t think her international phone plan worked, as she tried it at the airport when she first arrived and it didn’t. Luckily for us, it did. She called the hotel, and they said they would send a cab. We spent the next 45 minutes walking back and forth between one street lamp and another because it was starting to get pretty chilly.

At 7:45, Genevieve called the hotel back. The woman said the cab should be here shortly and hung up. At this point, many of the other lighthouse visitors had left, and even the sun peaced out.

At 8:15, Genevieve’s phone died despite being at 30% battery power.

I don’t really have a time frame for the rest of the events. What happened next was that Genevieve saw some people walking along the base of the lighthouse with these green flashlights. A few minutes later, we heard an ominous cough (though it sounded more like a monster/dragon to me at this point) and saw a man standing on the bank of the beach. A few seconds later, we ran for our lives.

Now, I’m not saying we were in any real danger. If it were daylight, we would have looked like two people running away from someone with seasonal allergies. But when a strange man startles you while you’re in the dark by the docks and you are in a foreign country and also have a vivid imagination, you run. We ran along the road until we reached the entrance to the beach. It was during this time I became very grateful for whoever invented street-lamps, and very ungrateful for whoever designed my rain boots that had about a half inch heel.

All out of options, Genevieve used my phone (which is only able to make emergency calls) to contact the Garda (the Irish police). They were rather confused as to where we were, and told us to call back with a landmark for our location. I guess a lighthouse isn’t a good enough landmark.

When we reached the entrance, we saw a sign for the “Poolbeg Power Station” and were overjoyed. It’s probably the most excited two people have ever been to see the “Poolbeg Power Station.” We tried to call the Garda back with our newly discovered landmark, but the calls kept failing. Just as we contemplated what our strategy would be for continuing down the road (lined with the spooky shipping crates) we saw blue flashing lights headed toward us. We waved down the police car, and I will never forget what the officer said:

And in such a cheerful tone as if I had called and left him a friendly voicemail saying I wanted to talk about my day, but would wait until it was a convenient time for him. We explained the situation realizing how absurd the abridged version sounds to an outsider: We waited for our cab. It didn’t come. It was dark. We saw a man.

Thankfully, they were very understanding and gave us a ride into town. They asked us where we were staying, and we told them. “Where’s that?” they replied. Oh no not this again. First we can’t get anyone to find us where we need to be picked up and when we finally do, they have no idea where to take us.

We told them to just drop us off by the college and we could find our way back, which we did. We were back at the hotel before 9:00, but it felt like 2:00am. After we had changed clothes, ate leftovers of our lunches and contacted our respective friends and family, it was just past 10:00. We headed down to the hotel bar and I settled on a pint…of ice cream. When asked by the bartender what kind, I meekly replied “All of it.”

We booked our bus tickets for 10:15am the next day, and we eagerly waved goodbye to Dublin. Despite the absurdity of the events, I have to say that I did have a really good time with Genevieve. I also felt confident through the entire ordeal that we were making the correct and responsible decisions. The moment we felt it was too unsafe to stay where we were regardless of the taxis that were supposed to come, we got out. Honestly, the story itself is pretty funny, and if I had to ride in a police car, I’d much rather it be under these circumstances.

You see, so often we as students put so much pressure on ourselves to be perfect. When we’re in high school, we need to make the best grades and have the most impressive resume in order to get into the best college. We have all these expectations about how perfect college will be, and when things don’t turn out exactly as planned, we don’t know what to do. This is the exact struggle I faced when I began my semester in Galway, Ireland. But, by the end of my time there, I learned that life never lines up with our expectations, and it’s our responsibility to create the adventures, opportunities and relationships that we expected to just happen.

The best stories are not made when things go exactly as we planned them. Memories are made by the experiences that challenge, surprise and inspire us. For me, this was a lesson I didn’t learn until my semester abroad. And maybe it wasn’t the semester I expected, but it’s a time in my life that I truly will never forget.

*Emory University uses these abbreviations to designate graduation year. For example, Lindsay will graduate in 2018 from Emory College, with her bachelor’s degree in Playwriting.