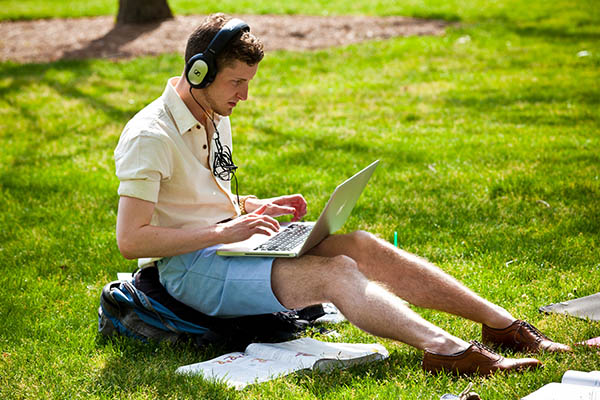 This is one of a 5-part series on application writing; read Part 2 here, Part 3 here, Part 4 here, and Part 5 here.

Describe a topic, idea, or concept you find so engaging that it makes you lose all track of time. Why does it captivate you? What or who do you turn to when you want to learn more?

The sail of the ship was a tongue. The vessel rolled over the waves of text, stammering on the punctuation marks before again finding its balance, gliding over the vowels. The seas were sometimes rough, the surface revealing the cause of such commotion: white caps spraying consonants into the surrounding ears. Where was it headed?

Language carries an intangible yet pliable kind of beauty. It is a concept that never ceases to call forth within me a renewed sense of wonderment. I often peruse through the memories of my past in an attempt to locate the origins of my attraction to the Spanish language—to understand just what lured my 7 year old mind to the seas of foreign speech. I have come to realize that maybe it wasn’t a feeling that suddenly sprung up but rather one that always existed, floating in the waters of my mind. Perhaps it was the way Spanish sounds carried throughout the air, euphonious and smooth, a stark contrast to the English sounds I had grown up hearing in Georgia. Perhaps it was my want to understand my best friend when she spoke to her Mexican parents. Perhaps it was all of the above.

Spanish words filled the air with vibrations my tongue wanted to know. After experiencing such fullness, I couldn’t help but despise vacancy. I subdued the silence and made it my duty to collect words and sounds and store them below the deck. The time that I once spent buried within the pages of novels and finger weaving with my grandmother’s yarn—was now shared with filling journals with newly learned phrases. My interest in language, however, was not limited to Spanish, although it remains my first obsession. Hangul, the Korean alphabet, was a puzzle I had taught myself how to piece together as an 11 year old yearning to familiarize myself with the foreign. The Arabic alphabet is a system I still have yet to come even close to mastering, but I try. At times, I close my eyes and embrace the touch of braille, and at others I open them to drink in the sight of hand gestures—American Sign Language.

I filled my hours with dissecting sentences and fighting my greatest adversary: time. I consumed articles, books, interviews, and dramas on my journey to understand new cultures and manners of communication. The dramatics of El Clon and Eva Luna plagued my speech, and my then 10 year old being was charged with awe. I carried language on my tongue, and in response, it carried me. Where was it headed?

Now only one of two non-native speakers enrolled in my AP Spanish Literature class, I can still say that my love for the language has yet to wane. I only wish others shared such a passion. Those that do not care for such sound exploration reflect a disinterest that eventually manifests into ignorance. With every passing day, the world shrinks in size, and I see it only fit that we adapt by learning the tongues of our neighbors to increase our sense of unity. Nelson Mandela once said, “If you talk to a man in a language he understands, that goes to his head. If you talk to him in his language, that goes to his heart.” I continue on aboard the ship cruising through the letter fused waters. Where was it headed?

I aim to cultivate understanding—to fill the gaping aperture between cultures with appreciation.

Language is my way of doing so.

In our work, it’s pretty common to read essays that center on a student’s future plans or intended area of study. While I’m curious to know where an applicant’s interest came from, too often essays boil it down to a single, isolated instance. I am thrilled to see that this student’s essay is more than just a retelling of an incident—it’s about a lifelong source of intellectual stimulation. Tied to their academic and professional interests, this student’s love of words is so deeply rooted in their sense of identity, that their writing compels you to keep reading and consider them in our classrooms, pushing conversations and connecting with faculty.

The student’s beautiful use of language captured me immediately. There’s a tension in their writing; they want to explore and satiate their intellectual appetite, but at times, they struggle to do so. They are accepting of the challenges they have not yet conquered. I get the idea that they’re proud of what they’ve done, but they acknowledge how much more there is for them to learn. This student is successful in navigating their past while being thoughtful and reflective. They maintain an openness and curiosity about their future and where it might lead. There’s something very earnest about their style of writing. Their sincere appreciation for diversity and their desire to form global connections through language are truly Emory.