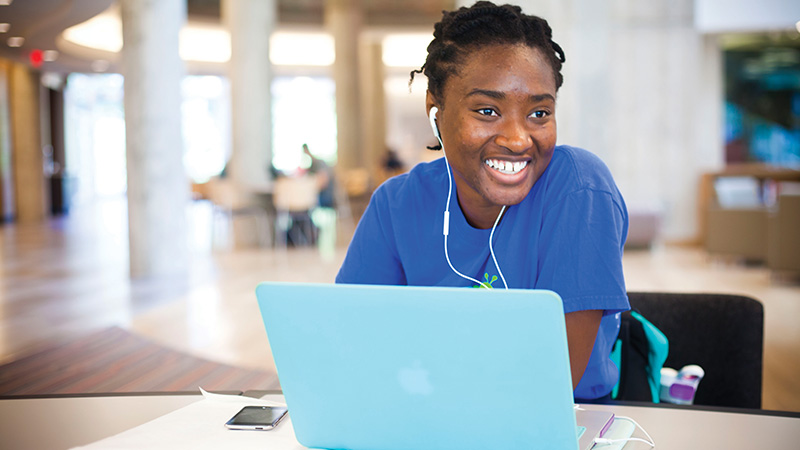 We’re sharing exceptional personal statements from last year’s applicants in hopes of illustrating that a good personal statement can cover a wide range of topics, but ultimately, showcases the student’s character, curiosity, and voice. These statements, written by students now enrolled at Emory University, were selected for a multitude of reasons, and we asked our admission staff to share what made each statement stand out.

This is one of a 5-part series on application writing; read Part 1 here, Part 2 here, Part 3 here, and Part 5 here.

Growing up with a stutter was difficult. My thoughts were always fully formed, but the words would get stuck. The harder I tried to force them out, the more they would jam up, like train cars going off a track. Sometimes kids would laugh or make fun of my stutter, but mostly they just ignored me. They had better things to do than wait to hear my ideas, so they assumed I had none worth hearing. Eventually, I gave up talking to people entirely. They thought I was stupid, and, soon enough, I thought so too.

My parents signed me up to play soccer in the hopes that being part of a team would help me make friends. I wasn’t particularly athletic, and I could barely kick a ball. But soccer is a game anyone can play. On the field, my stutter didn’t matter. I discovered that I could lead, quietly, through action, rather than words. Eventually, speech therapy resolved by stutter, but it was on the soccer field that I learned how to be me.

One of my teammates had a brother with Down Syndrome. Every season, he came to our games to watch from the sidelines. He had cleats and a ball that he kicked around by himself, but because he also had an intellectual disability, there was no room for him on our team or anywhere else. I realized that although soccer is a sport for everyone, not everyone is included in the sport. I understood the pain of being excluded simply because of an inability to communicate. So, in February of 2015, I launched GOALS (Giving Opportunities to All who Love Soccer), a unified soccer program for kids with and without special needs. GOALS partners youth athletes who have intellectual disabilities with neurotypical peer buddies. The athletes and buddies play together, as unified pairs, in small-sided, non-competitive scrimmages.

The first GOALS program had just nine participants. Today, we hold GOALS events twice a month for fifty players of all abilities. GOALS has impacted over 400 kids and is now an official partner of Special Olympics Arizona. But I don’t measure the success of GOALS by the numbers. Success comes in the form of an athlete like Josh*, who came reluctantly to his first GOALS event, having never tried sports before, preferring instead to play video games by himself. Josh was surprised to find that he loves soccer, and he looks forward to playing with his friends at every GOALS event, where his diagnosis of autism doesn’t define him.

What makes GOALS special is that it is not a community service program for kids with intellectual disabilities. GOALS is a program that serves the entire community, understanding that our community includes people of all abilities. GOALS champions people for what they bring to the community, rather than defining them by what they take. GOALS breaks down the barriers that separate kids with special needs from their neurotypical peers, creating intentional connections that allow true friendships to develop. For many kids, GOALS is the first time they experience genuine acceptance.

Through sports, we have the capacity to create something better than tolerance. Tolerance is for summer heat, visits to the doctor’s office, and lines at the bank. People, though, deserve more than tolerance. People deserve acceptance. So often, kids with intellectual disabilities are isolated socially, for no other reason than that kids pass them by. But special needs kids can be incredibly smart and talented. We just need to slow down long enough to get to know them. Some need more time to turn their ideas into words, but we can afford to have those slower conversations. That is why, for me, unified sports will be a lifelong passion. Through sports, anyone can communicate that each of us is valued, each of us is a part of the time, and each of us is a friend worth having.

As you begin to read the essay, you immediately get a sneak peek into the applicant’s challenges and insecurities. This is critical because we want to get to know students and see how they will fit into our Emory community. By sharing these details, you get the sense that the applicant is being genuine, and it allows the reader to connect with the applicant. The writer addresses their personal challenges with a speech impediment and talks about how they found relief and peace in soccer. They took this a step further and shared how they wanted to take the relief and peace he found in soccer and help others with a program.

What was beautiful about the program, and the essay overall, was that the student demonstrated their ability to think on a deeper level. This was not simply about starting a program. It was about finding solutions to a larger societal challenge for students with disabilities. The beauty is that the student used sports (something they love) to help bridge the gap.

This essay was not about using sophisticated language or telling an intricate story. Rather, it was about honesty, passion and the student’s life experiences.

The essay was great because we had an opportunity to get to know the applicant and at the same time understand the context of their life. Simultaneously the applicant took on new challenges and served the community all while doing something they loved.